Do more, with less

Genero Enterprise comprises Studio – a Low-Code Development Platform (LCDP) that enables developers to produce sophisticated business apps with an application modeler in weeks rather than months and years.

Business Application Modeler (below) enables developers to create workflows in minutes with functional prototypes in hours and days. App wizards enable developers to integrate Web services without the knowledge of the underlying http or SOAP protocols… 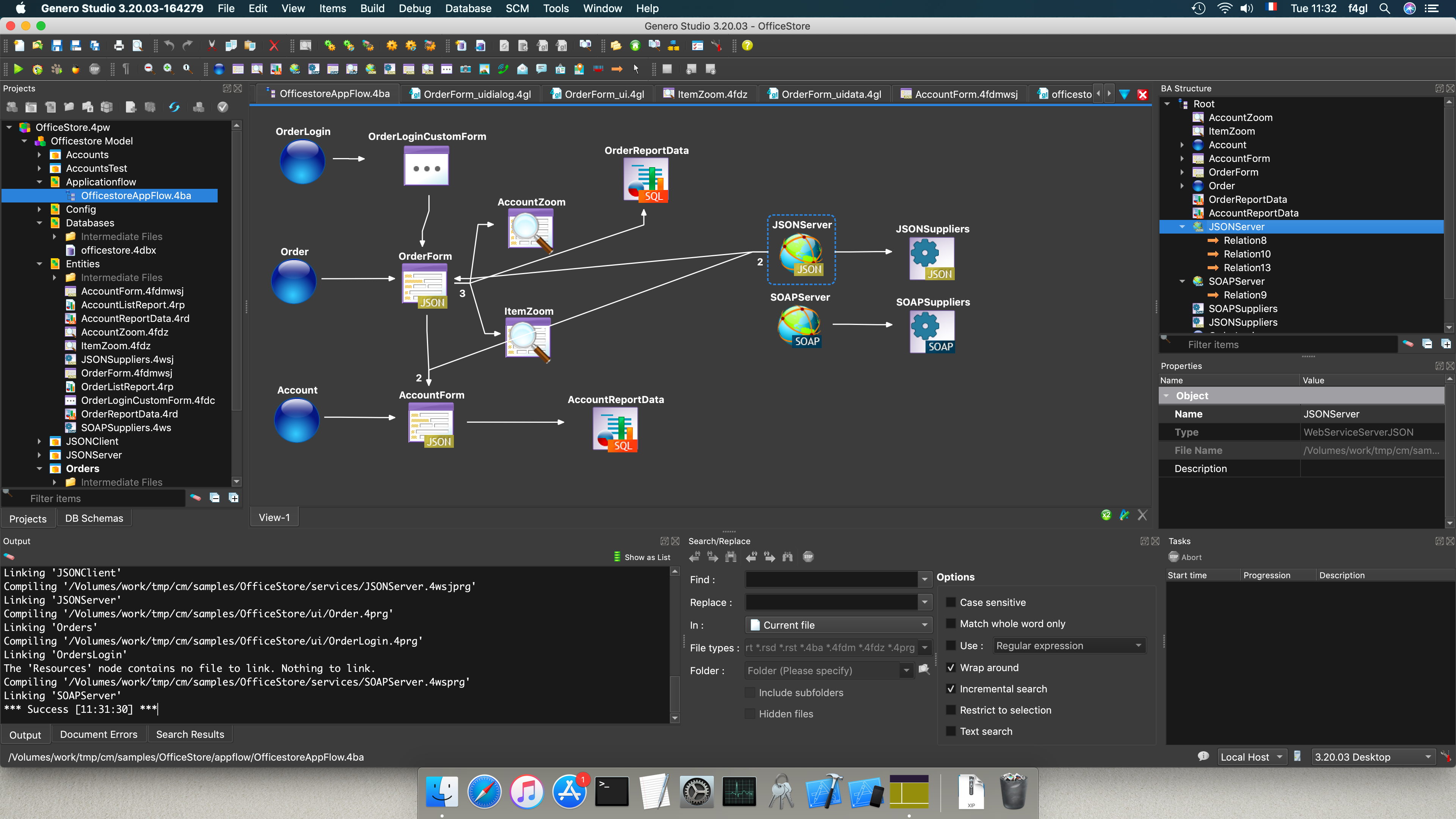 … and model applications from database schemas created with the Database Designer. 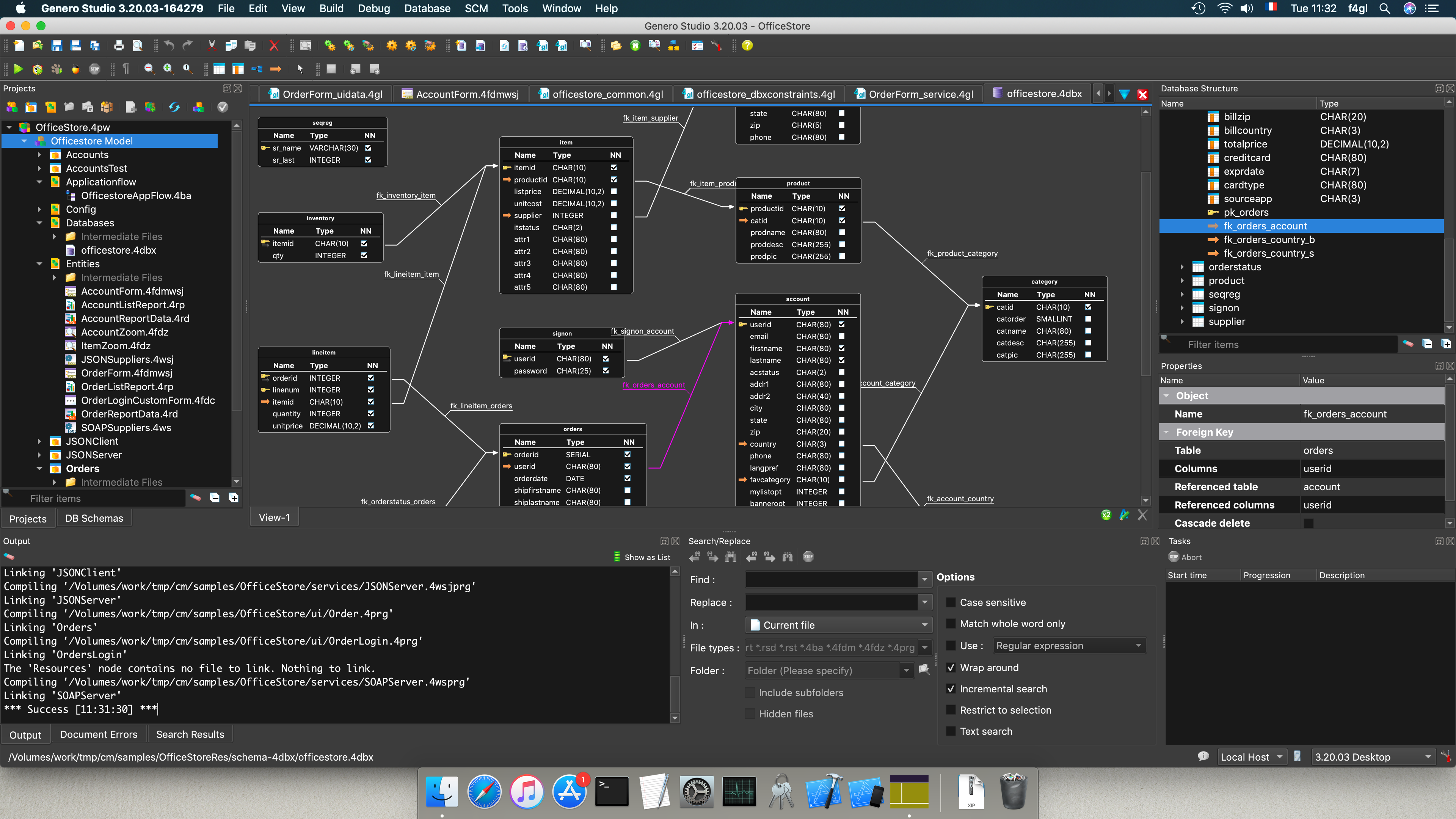 Focus on innovation, we take care of the rest

Genero Enterprise is also a deployment infrastructure designed to improve the overall developer experience by rendering the deployment of applications easier than with traditional tools. Its abstract approach to supporting today’s latest platforms means that code from a single source repository runs everywhere – without compilation. This means saving precious time – especially in unit-testing, where one release ‘fits all’. Develop and deploy for all these environments from a single compilation.

The result: more time and resources focused on innovation. 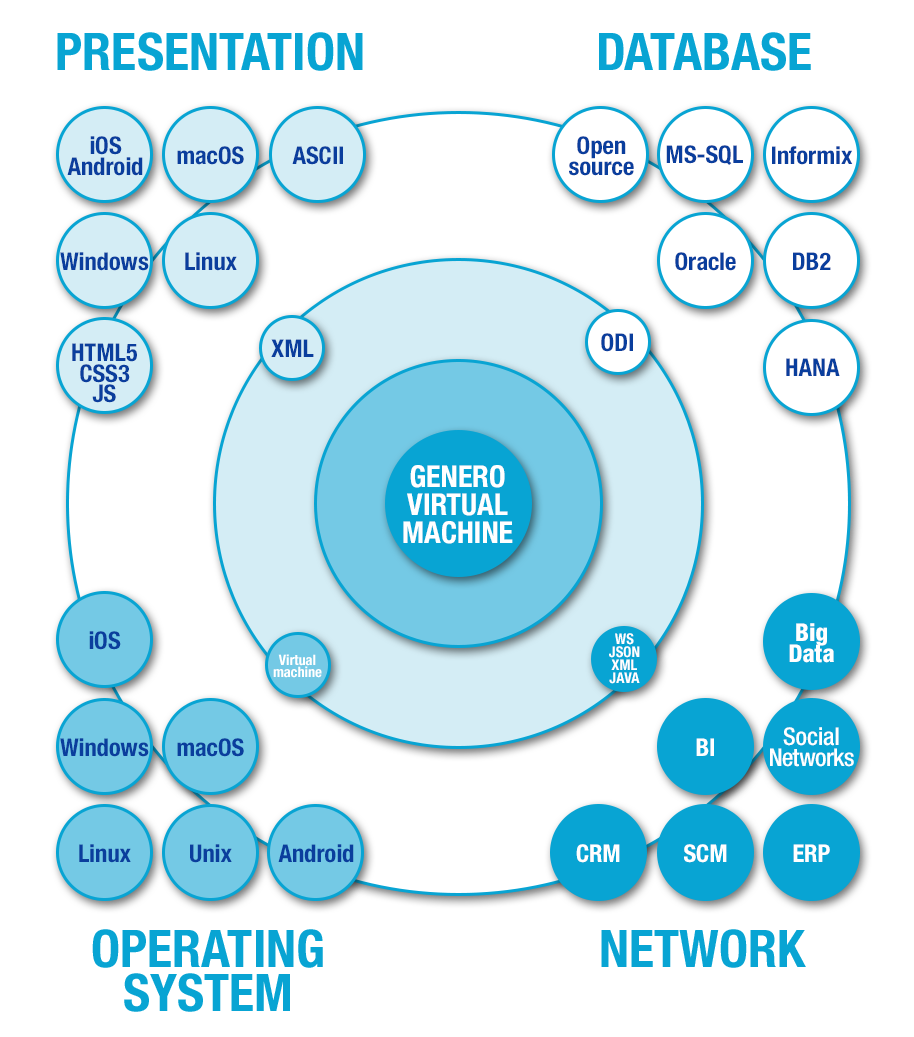 Genero Enterprise prolongs the life of your applications. Apps developed before the advent of Web services can be quickly adapted to create Service Oriented Architectures, Software-as-a-Service with HTML5, and mobile applications with gesture-based, touch-sensitive smartphones and tablets. No need to rewrite! Apps run everywhere and will continue to run everywhere for decades to come irrespective of what progress throws in their path. 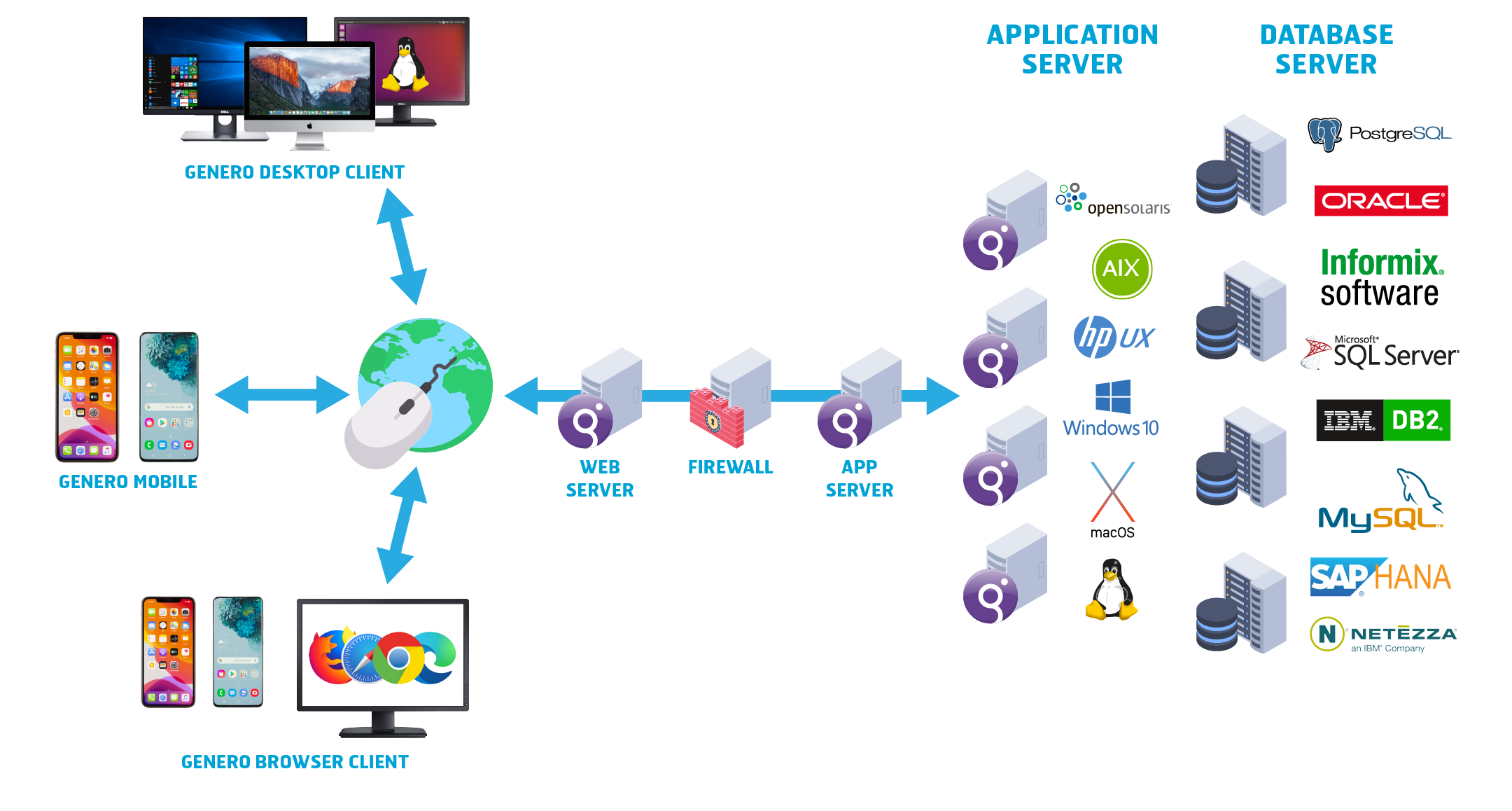 No decently-sized project with sophisticated business rules can be 100% modeled. There are times when it will be necessary to write some code – this is afterall, the meaning of ‘low’ in the term low-code. When it comes to finalizing the application with custom code, make sure the scripting language you use is well adapted to the task in-hand.

There are two aspects to consider:

Genero’s Business Development Language is designed for business applications. That’s why developers write half the number of lines of code with a fraction of the bugs of other tools. The table below ranks developer productivity as a function of ‘Lines of Code per hour’ and ‘Error Rates‘ (bugs produced) using the Carnegie Mellon Capability Maturity Method Level 5 in real-life development projects. The extremely low error rates witnessed using Genero Business Development Language is due to its simple to read syntax. 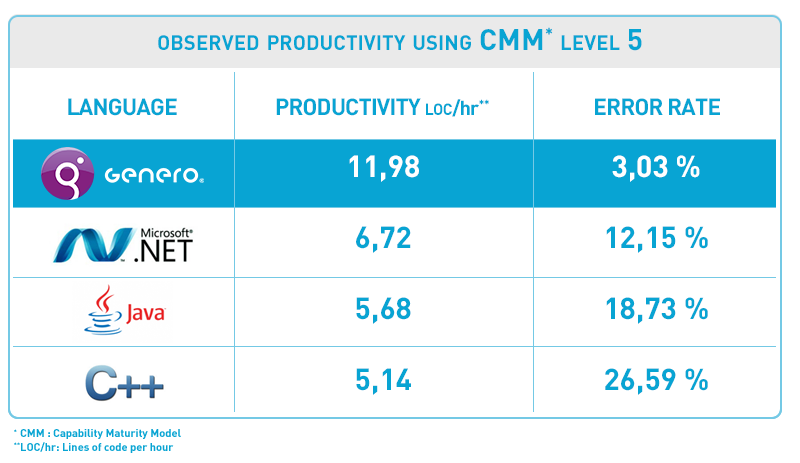 MATCHING THE TOOL TO THE PROBLEM

When projects fail, it is rarely due to some fault in the tool itself. It is more often down to a mis-match between a developer’ skillsets and the selected tool. In many cases, the tool may simply be poorly adpated to the nature of the project.

Much of a programmer’s time when creating enterprise applications is spent coding data access.

Much of that time is wasted when using object oriented programming languages.

Object-oriented languages produce code that consists of small “object classes” or slightly larger “components”, each with the data it uses typically incorporated in the code. Most data, however, lies in relational databases that do not contain the code that accesses the data. As a result, developers must translate in their code between the data-invocation format of an object class and the data structures of a relational database and the task is rarely easy.

Of the 40-50% of coding effort devoted to data access in today’s applications, as much as 80% can be devoted to bridging the object-relational divide.

This time is avoided when using Genero Enterprise. Its design centre is to access relational databases, and it embeds the SQL language into its syntax for this purpose.

What is Low Code ?

Technical Support and Maintenance terms and conditions for Genero

Technical Support and Maintenance terms and conditions for BDS