The Price of ‘Free’ Java

“There’s no such thing as a free lunch” – so said world renowned economist Milton Friedman who popularized the phraze by using it as the title of his 1975 book.

The “free lunch” refers to the once-common tradition of saloons in the United States providing a “free” lunch to customers who had purchased at least one drink. Many foods on offer were high in salt (e.g. ham, cheese, and salted crackers), so those who ate them ended up buying a lot of beer. It was the beer that paid for the lunch.

The same tactic seems to be in play with Oracle® Java®.

No Such Thing as a Free Lunch

Tempted by the promise of open software, programmers innocently develop applications they believe to be free – unbeknowingly including components that are not.

After a six year haitus from the purchase of Java creator Sun Microsystems in 2010, and after the recently failed $8.8Bn lawsuit (in appeal) against Google, Oracle has created a dedicated ‘SWAT’ team of 20 Java specialists to go audit its customers. Times are hard and Java must pay its way. And the bill left by the auditors can sometimes be as salty as the ‘free lunch’ – 5 and 6 figure sums are being asked of customers that once lauded the ‘freedom’ of Java. Oracle denies this. They claim it is ‘business as usual’. Customers disagree.

According to an article that appeared in The Register, December 16, 2016:

“… Huge sums of money are at stake, with customers on the hook for multiple tens and hundreds of thousands of dollars.

… The Register has learned of one customer in the retail industry with 80,000 PCs that was informed by Oracle it was in breach of its Java SE agreement. Oracle apparently told another Java customer it owed $100,000 – but the bill was slashed to $30,000 upon challenge.” 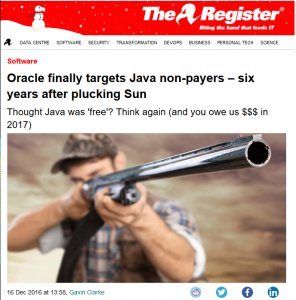