The complete Genero Product suite now comes bundled in a single package and preconfigured to be used from Genero Studio. Apart from the DVM and GDC, it also includes the Report Writer, the Application Server for Web development and the Web Services. After installation, you will be able to directly run all provided application samples and reports as Desktop applications (using GDC) or Web application in the browser (using GAS).

The new installers, based on Windows Installer (MSI) on Windows, provide default configurations for a Workstation and development server using the latest Genero Product versions. 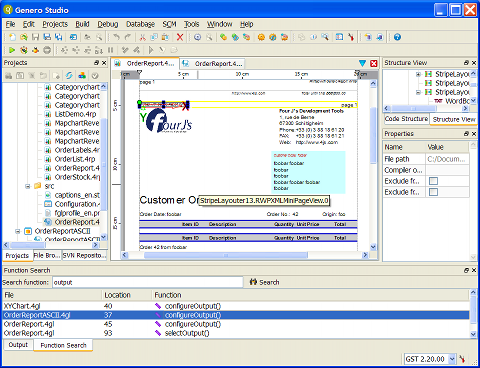 This version proposes you new features 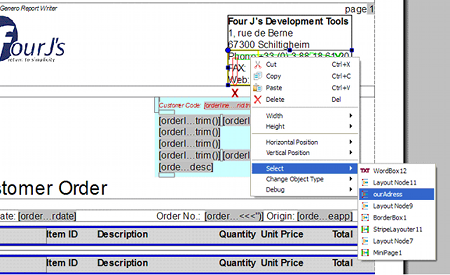 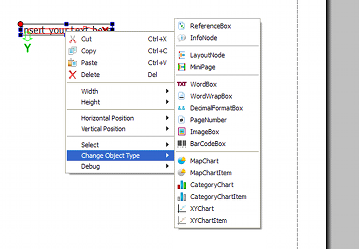 Any reporting object can now be surrounded by a border. The available border styles are “solid”, “dotted”, “dashed”, “groove”, “ridge”, “inset”, “ouset”, “double”. The style, thickness, marging and padding can be set either globally for all edges, or separately for each edge. “Margins” define the outer space, “Padding” the inner space and “Width” the thinkness of the border. Margins and Padding properties can also be used to define the spacing between elements, even when no border is actually displayed. 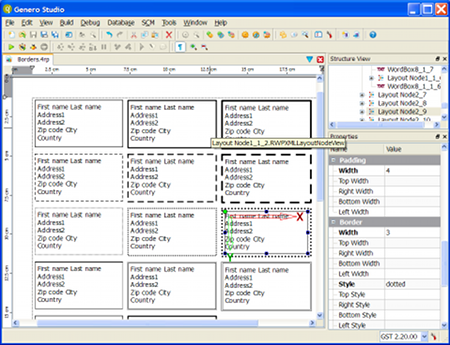 The query builder assistant helps building the report data from a database. It guides the user in  selecting tables, columns, joins, sorting order…to build an SQL statement for querying the database in order to gather the data to be displayed in the report. The Genero BDL source code of the report is generated and can eventually be modified later on.

Genero Studio 2.20 supports all the Genero 2.20 features. The Code Editor supports the new 2.20 syntax and APIs in its syntax highlighting and completion. The Meta-Schema handles the new databases support and the recent drivers for Genero db 3.80 as an example. The Form designer makes the tree view, phantom fields… and other form features easy to use.

Of course, earlier Genero versions since 1.3x are still supported.

A Meta-Schema is a central repository which contains information about the tables, columns and relations of a database schema. The aim of such a repository is to centralize all common information rather than duplicating it in each form or application.
It also provides the appropriate default values when using the tables, columns or relations in Forms or Generated applications. Hence, the use of the Meta-Schema has a direct impact on productivity and maintenance.

The database browser module has been enhanced to become a Meta-Schema manager. As previously, the database schema (table, columns, relations, indexes) can still be imported from your database and used in Studio.

But the schema is now editable and can be enriched with information which is not present in your database. When relations are not specified at the database level, you can still enter this information manually in the Meta-Schema. Among the other information which can be attached to a field, its label and preferred widget can also be mentioned. These will be used in the Form creation assistant.

The Meta-Schema can be re-synchronized with the database, in case of change. All entered information is of course kept in the Meta-Schema, even when a database table has disappeared from the target database.

For simplified team development setup, SSH (Secure Shell) connectivity is now provided to access the server tools. Each Genero Studio user connects to the server with its own login via SSH, and is granted rights according to his credentials. This solution is both more secure and easier to adopt because it uses standard OS mechanism to guarantee the server security.

The subversion client integrated in Genero Studio has been completed to support all Subversion features. Advanced Merge, Copy, Revert and Switch… operations are now provided.

Ergonomics has been reviewed as well to allow multiple operations in parallel:

The repository browser gives direct access to operations on the remote repository without checkout. 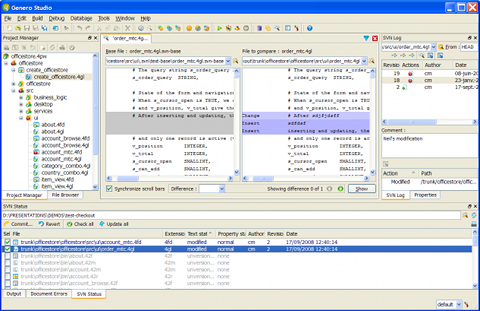 The Code Editor has been rewritten for better performance. The memory consumption is reduced and the response time is improved for large files and files having long lines.
The syntax of more than 50 programming languages is now supported so that you can use the same editor for all kind of files, including shell, C, C++, java… 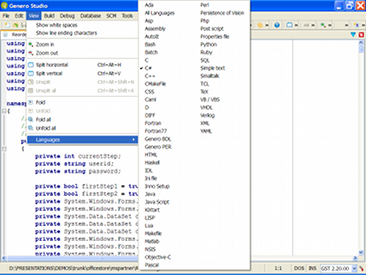 For each language, advanced preferences allow customizing the appearance (font, style, color) for each element of the language. Using different fonts in a single file is now possible.
As an example, comments can be in a smaller font. 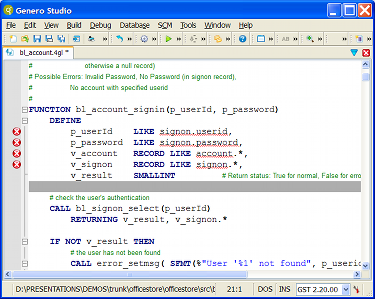 The editor also includes some smart editing features to auto-close strings, brackets, parenthesis…, automatically trim white spaces.
The search and replace now appears in a docking view and includes an incremental mode which highlights the results as you type.

For Genero source files (.4GL), the completion for functions now includes all functions of the current project in the proposals making it easier to call functions in other modules.

The search and replace has been reviewed. It now allows searching in all types of files including Forms (.4fd) and Projects (.4pw). For forms it intelligently searches in all attributes visible to the user rather than searching any element of the XML file. A text search mode is also available to disable the smart search and search in the raw text file.
Search/Replace results (and options as well) appear directly as docking views for quick availability and navigation. 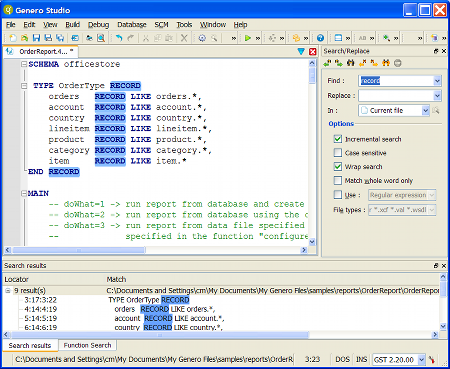 Apart from defining how to build applications and libraries, the Project Manager centralizes all project related information, it provides completion, function search and symbol definition information for the Code Editor using an internal symbol database.

The build now takes advantage of multiple processors or multi-core processors. Whenever possible, build tasks are run concurrently on the available processors. The number of concurrent tasks to be run can be defined in the preferences.

The Debugger’s ergonomics has been reviewed for quicker access to the common functions. The start/stop/interrupt commands have been simplified and can be used directly from the Project Manager or File Browser. Breakpoints can be enabled/disabled directly from the Code Editor.

After each execution of a part of code, the variables modified during the last run are displayed with a visual indicator to be able to locate them quickly.

To be able to quickly re-run a sequence of debugger commands, the commands can be recorded and replayed later. 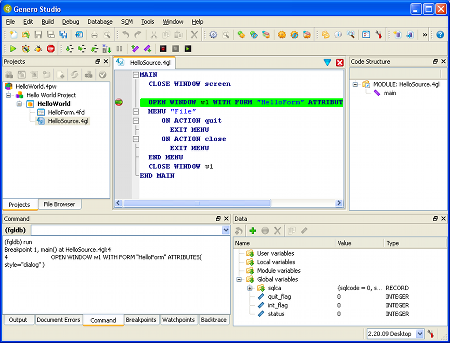 The Form Designer now assists the user in creating forms by performing a real time validation of the form while the user is editing it. Warnings and Errors refer to the erroneous object or property and select it when the message is double-clicked. A detailed help (F1) is available for each message as well, indicating the corrective action to take.

The “Form from table” assistant (aka. “Data Control”) uses these Meta-Schema information as well as the new drag and drop functionality from the Schema view elements to the form: columns or tables can be dropped, creating respectively a field as defined in the Meta schema or a complete form for the table.

When there is no Meta-Schema information available, the default widget is the one defined in the preferences.

The “Convert Container” wizard quickly transforms a container to another type. It preserves the fields,  labels and properties whenever possible. 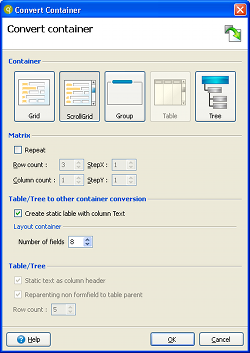 The new Matrix element replaces the MFArray, it now behaves like a Formfield.
The Formfields can now be transformed more easily to (from) column and Matrix. The widget property changes the decoration keeping the other properties unchanged. 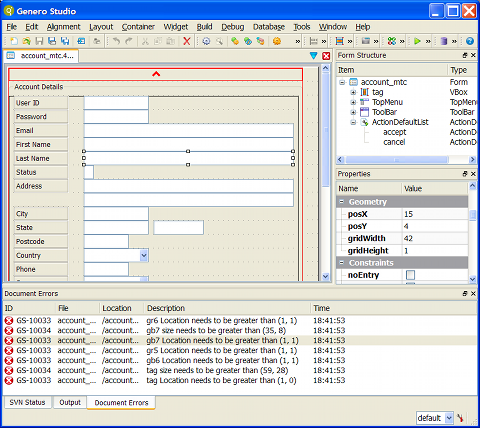 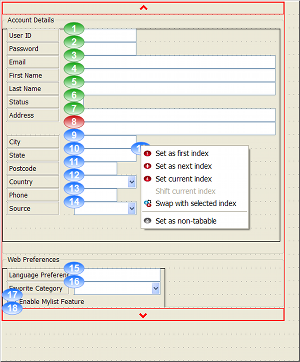 It gives guidance to discover the new functionalities of Genero and Genero Studio with some sample applications.
The welcome page can be customized in the preferences to show/hide sections or display the RSS feeds of your choice. 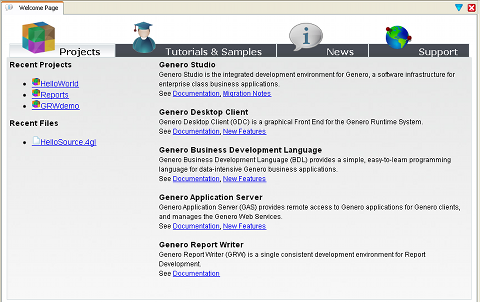 Since Genero Studio 2.20, a new Task Manager panel is now available.Thanks to this panel you can see the progress of the different running tasks (Build, SVN Checkout/update …) and also all the running applications. 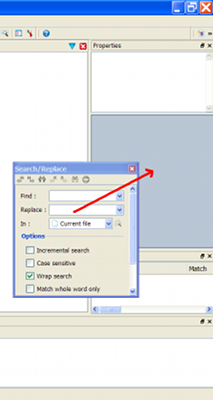 This can be useful for background tasks like nightly builds for example.