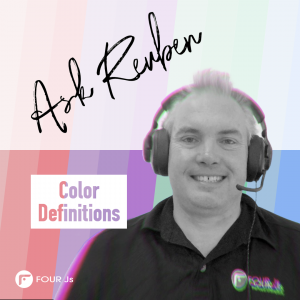 What is the RGB color value of Green?

Why is reverse color different from normal color?

Why is the same color rendered differently in different widgets in my Genero form?

Just as the Americans and English can’t agree on whether it is color or colour, (if in doubt we adopt the US spelling) there is not uniform consensus on what color is represented by certain words and syntax.

Going back to 2009 when Genero 2.20 was released, in the Upgrade Guide there was an entry advising that the colors used for green, gray, maroon and purple had changed.  This was because the Qt libraries had gone from using the X11 color model to the W3 color model.  Green was the most noticeable change, its RGB definition had gone from #00FF00 to #008000. If like me you find the #00FF00 definition of green hard to read against a light background, you can probably understand why the W3C committee made this decision.

For similar visibility reasons, the colors used with COLOR (TTY) Attributes were not necessarily the same when used with or without REVERSE. For instance using the same shade of red on a light background for a reversed background can be hard to read. Hence when RED REVERSE was used, the background color was made a lighter shade of red to enable the black text to be seen against the reversed background.  Similar things happened with the other TTY attribute colors coded into Genero, they were typically either made lighter or darker.  This made the colored text more readable when used against  a standard light background and/or when black text is used against a colored background.

The GBC documentation has sections on how themes and colors work, the Material Design Palette, and the Material Color Constants.  It also has a page that shows what colors, the standard Genero syntax colors map to.

What you should observe in this first screenshot is that …

Now with Universal Rendering in the second screenshot …

In summary we are dictated to by the third party libraries we are using.  If you want fine control, consider using the raw RGB values rather than a color name.  A portable approach is to use system colors.