You are here: Home1 / News2 / Products news3 / Genero Mobile and the Inflection Point in the App Ecosystem

Genero Mobile and the Inflection Point in the App Ecosystem

Irving, Texas – September 20, 2013 — Undersea tremors are rippling their way through the application ecosystem, creating waves that have finally reached the shores of Lake Sammamish. These tremors provoked two important events that shook the bedrock of the IT industry these last two weeks: i) Steve Ballmer’s resignation as Microsoft CEO leaving no apparent heir and ii) his subsequent purchase of Nokia Devices. Both events are a tacit recognition by Microsoft of the serious threat posed by Apple and Google using platforms that are orthogonal to the way it normally does business.

These tremors appear today as distant waves on the horizon, but they are swelling into a Tsunami that will transform the application ecosystem as we know it. Don’t stand admiring the distant wave for too long. It will break land sooner than you think. 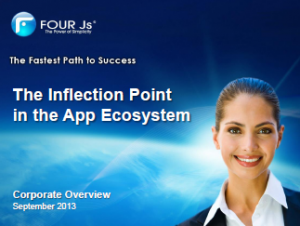 Learn more about the transformation taking place in the application economy
and what Genero Mobile can do for you by clicking on the image above.

The emergence of Google as the new Microsoft and Microsoft as the latter day Apple, struggling to garner followers to Windows Phone, illustrates the accelerating cycle of rise and decline in the computer industry.

Microsoft is no longer steering its yacht across the peaceful waters it once governed. It has sailed to the end of the lake and is being sucked into the rapids gouged by the fingers of consumers swiping their touch screens left and right in an anarchic frenzy for the next best thing. Microsoft is master of the desktop, but slave to the mobile devices that consumers devour in ever greater mouthfulls and drive into the top 3 priority list for most CIOs.

For the first time, Smartphones are outselling feature phones. Their 64-bit architectures now rival the performance of desktops. Tablets will shortly outsell PCs. Add to this, Cloud delivery systems that are changing the business model for the delivery and billing of applications. Developers hold the keys to this transformation and the long-term survival of their businesses.

This is why 2013 is a pivotal year for the application ecosystem.

The advent of Genero Mobile is an important landmark for us and our customers. For our customers because it will carry them through this transformation swiftly and at minimum cost. For us, because it allows us to adventure towards new horizons and attract new customers to the community.