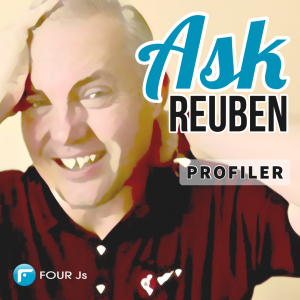 Where is my program slow?

What is the profiler?

How do I interpret the profiler results?

The Program Profiler is a very handy tool for the developer that allows them to determine why and where their program is running slowly.  It can help you identify bottlenecks in your code and suggests where there is room for potential improvement, and where you should invest your time looking to make it run faster.

To execute a program with the profiler is very simple.  In Genero Studio you can right-click on an application node and select “Execute with Profiler”, or from the Debug Menu select “Execute with Profiler”, or select the appropriate icon from the toolbar, it is hard to discern but it is a green triangle over the top of a stopwatch.  From the command line it is a case of using fglrun with the -p option e.g.

Output is written to stdout and in Genero Studio this is captured in the Output panel.  The output consists of two sections.

The first section is called the Flat Profile.  It tells you what functions have been called by the program, how many times they have been called, what percentage of time has been spent in each function, and how that time inside a function is split between the function and its children.

To illustrate this, compile and run the following code using the profiler …

… you will get output similar to …

… the way to interpret this is that each section relates to an individual function.

The line with *** is the name of the function.

The lines above the *** are labelled <— and are the functions that are calling this function.

The lines below the *** are labelled —> and the functions called from this function.

So if we look at the entry for the function loop() …

What this can tell is if the function is being called with a bad set of arguments that lead to it taking a long time.  In this example, we can see that when loop() is called from loop30000() it is taking approximately 3 times as long to process as it did when called from loop10000() which given the parameters is not surprising.

Some things to observe in the results …

As the profiler measures time spent in functions and not lines of code, you may get better analysis if you break long functions into several smaller functions so that you get a result for each of these smaller functions.  For instance wrapping CONNECT inside a function is a good idea if you want to analyse that time as a database connection often takes some time.

The GUI connection also takes some time.  This can be demonstrated by running the profiler with  $FGLDIR/demo/demo and exiting the program straight away.  The function that takes most of the time is rts_optionsSet which coincides with the OPTIONS INPUT WRAP which is the first bit of UI in that program.  This first bit of UI is where the GUI connection and initialisation is occurring.  If you add a ui.Interface.refresh() immediately before that and run the profiler again you will see that the ui.Interface.refresh() is now consuming the time as that is now the first bit of UI.

What this last point means is that you may find it beneficial to create test programs to test individual functions or processes.  These programs can be run with no GUI interface (FGLGUI=0) and the results won’t be clouded with time spent connecting to the GUI.

You can read more about the profiler in the documentation.  It is a useful tool to analyse where time is being spent by a Genero program and make your programs more efficient.

As a final tidbit, run the following in the profiler and guess beforehand how many times is loop_start() and loop_end() called? …

… answer is 1, now repeat after uncommenting the OPTIONS SHORT CIRCUIT. and you should observe that b() is no longer called.  That is, it won’t be evaluated unnecessarily.

You can use the profiler like this to justify programming techniques so open your eyes to using it with small test programs and experiments, as well as analysing complete programs.