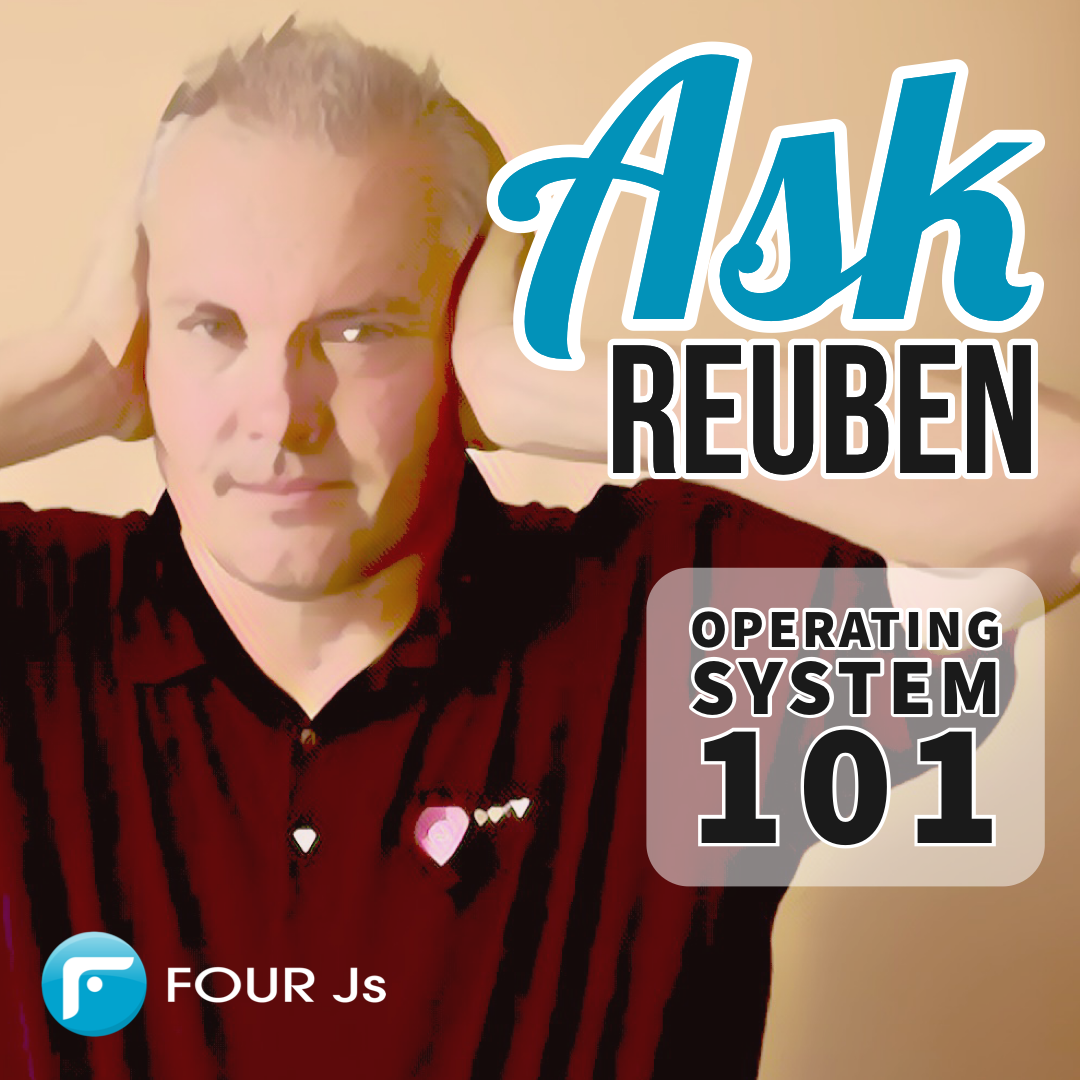 Questions where the answer is because …

This weeks Ask Reuben on Operating Systems is one I have been attempting to write for a few weeks and is a little different.  I have been wanting to write it as I am conscious that I have concentrated on Genero code issues and I want to branch out into our other products such as Genero Application Server, Genero Studio, Genero Report Writer, Genero Mobile and this touches across all our products.

Genero does not do anything special with regards Operating Systems.  We have to respect and follow the rules operating systems put in place.  There are a number of questions I see in the support portal where there is a lack of understanding of

Frequently I see users concentrating on the how but what they need to do is step back and look at the what and why.  For example I don’t think I have ever been asked how to set LD_LIBRARY_PATH in Genero Application Server or Genero Studio configuration, but we have had cases raised where the answer is that LD_LIBRARY_PATH is not set to the value needed, but the person asking the question has not identified that LD_LIBRARY_PATH not being correct is the problem.

When a process is running on a server, it has certain properties …

When typing and executing a command from the command line, we have a good idea of what those properties are.  (Examples below with Linux, other operating systems have equivalent commands)

Acts such as compiling or running a program from Genero Studio, building and deploying a Genero Mobile package in Genero Studio, running a Genero Web Application by typing a URL into a browser, making a Genero Web Service call, if you look closely on the operating system you will see there is a command being executed and this command will have a name, have the concept of a current working directory, have an owner, have arguments passed to it, have an environment.

The Genero Application Server configuration allows you to see this in one place.  If you look in the EXECUTION node, you will see …

… if you do a ps e.g. (ps -ef | grep ‘fglrun’) you should find the running process.  You should also be able to find the proxy and dispatcher processes as per the Genero Application Server architecture.  If you look in these proxy and dispatcher logs, you will find that the value of the environment can be output in the logs when the process starts, see this tip here about making sure CATEGORIES_FILTER includes CONFIGURATION.

There are two common misconceptions I see with programs launched via GAS.

You can also find the environment dumped into the log files as mentioned above and in Genero Studio you can right-click on the application node to get a dump of the environment.

A tip I also give is to add logic similar to  …

… as close as possible after MAIN to look at the actual environment the process has when it runs.  A number of support calls have been solved doing that and the developer realising that when their program executed it did not have the environment variable value they were expecting.

I mentioned that the process operating is set by the EXECUTION node in the .xcf when using GAS.  With Genero Studio a similar process occurs so that when you build, execute, package, deploy etc, a command is built-up and executed with a particular environment in a particular directory.  The places where it is set are more varied.   The Genero Configuration Management dialog has details of the runtime, environment sets and what user interface client to use.  There is a little more to it than just what appears on that dialog but if you right-click on an Application node and investigate the entries Display Environment, Edit Build Rules, Edit Package Rules, Advanced Properties you can either see where the command was derived or check its value. The Build Rules being a good one to see the steps being executed when a compile is taking place.  The key point to takeaway is that Studio like GAS is building up a command and executing it.

One question I get after asking developers to try and have an understanding about what processes are running, is what is gsproxy?  You won’t find a mention of it in the Genero Studio documentation.  Where you will see it is in the .xcf files created by Genero Studio when you run a program using the Genero Application Server.  If you find them in FGLASDIR/appdata/app you will see two .xcf files are created with your appname_yourname_studio.xcf and appname_yourname.xcf.  If you study these two .xcf files you will see different entries in the EXECUTION node …

… the file that ends  _studio.xcf has gsproxy as the process launched and some arguments that include the program name.   This .xcf ending _studio.xcf is the one you will see in the browser URL field.  gsproxy acts as an intermediary between Genero Studio and the running instance of fglrun -d, and is used to pass the debugger instructions from when you click next/step in Studio to the fglrun -d instance, and in turn brings the variable values back from the debugger to Genero Studio.

If after the program has terminated you copy and paste the URL ending _studio into another browser tab, this will fail.  The URL you need in this instance is the one that does not end _studio.xcf.  So the two tips here are

Final point of operating systems is consider what servers processes are running on and how are they communicating.  With GDC Direct Connection, we know that fglrun is running on one server and GDC is running on your local workstation.  That is typically FGLDIR/bin/fglrun is running on the back-end Linux server and gdc.exe is running on your front-end workstation.  FGLSERVER controls the port that fglrun communicates on, -p controls the port that GDC listens in.  But do you know the present working directory of the gdc.exe executable? Why can’t FGL_GETFILE find a file, have you specified file absolutely or relatively, if relative what is it relative to …. This isn’t unseen Genero magic, this is following operating systems, if I am specifying a file relatively, what is it relative to?, and does the owner of the gdc.exe process have permissions to read that file etc.

I encourage you if necessary to draw a diagram of the various pieces.  This diagram comes in handy with Genero Report Writer, in the architecture there are 3 pieces and so issues with fonts, images, files not found, normally come down to the fact not considering these 3 pieces (the designer, the engine, the viewer).  Is the font or image used by the designer on their PC, is it available on the engine, and on the viewer PC etc

Some tidbits to end.

I appreciate I may have raised more answers than answered with this article as it is widespread.  Don’t be afraid to dig deep down to the O/S level and try and understand what is happening as that may help you analyse and resolve issues, and improve your usage of our products.