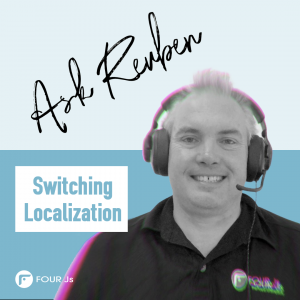 Why can’t I write an application with small flag icons to switch language in the middle of my application?

How can my application switch the language used?

By using the Localized Strings feature in Genero you can translate all your field labels, column headers, window titles, error messages etc to different languages. There is one key point to understand when it comes to adding the ability for the user to switch languages at will.

With Genero and its single page application architecture there is a fglrun process running in the backend for the lifetime of your web application.  Consider this code in a Genero application

In that first line the expression upshift(%”hello.world”) is evaluated and the result (“HELLO WORLD”) assigned to the variable foo and then displayed to field1 and field2.

Whilst we could on selection of a language, change what we can identify as static text in forms, we could not change the dynamic text on forms, or the data held in the underlying programs variables that has already been evaluated.

What Genero does have is a method that allows you to switch language at the BEGINNING of a program. The base.Application.reloadResources method will overwrite the search path defined by FGLRESOURCEPATH . So any time after that, when a localized string file is loaded, the new path will be used. At the beginning of an application you can therefore  …

… and then call base.Application.reloadResources() to switch FGLRESOURCEPATH so that future loads of the string .42s files are from the appropriate directory.  Just note that the module that has the base.Application.reloadResources() will already have been loaded so this module and any other modules loaded at this point  should be kept to a minimum.

In summary don’t expect to be able to switch language mid application.  Consider adding the ability to switch language at beginning of program by having a small module at the start that then calls base.Application.reloadResources based on the users selected language before the bulk of the program is loaded.  If you have a main menu or portal you may put the language selection there so that applications are launched with the desired language.  You could if you like experiment with code that changes static labels in forms but there would still be the problem of what about variables in memory that have already been evaluated and dynamic labels on forms.