GUI Widgets in a Construct 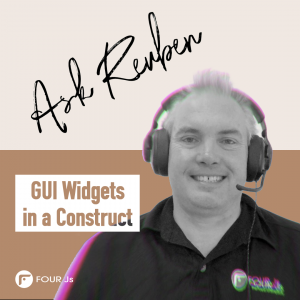 Why does a COMBOBOX allow you to select multiple values  in a CONSTRUCT ?

Why does a RADIOGROUP allow all you to select multiple values in a CONSTRUCT ?

Why does CHECKBOX allow 3 values in a CONSTRUCT ?

How do you validate values a user enters into a CONSTRUCT ?

How do you limit what is entered in a CONSTRUCT ?

An observation that an end-user may make is that a COMBOBOX in a CONSTRUCT allows the user to select multiple values whilst a COMBOBOX in an INPUT, only one value can be selected.

In the screenshots below the first image is from an INPUT and only own row can be selected.  In the second image which is from a CONSTRUCT, each item in the COMBOBOX is rendered with a little check-box that indicates if the row is selected and multiple rows can be selected.

Similar observations can be made with other widgets.

The first screenshot is from an INPUT with one value selected, the second is from a CONSTRUCT with multiple values selected.

The first screenshot shows two checkboxes corresponding to VALUECHECKED and VALUEUNCHECKED.  The second screenshots also shows the third state that is available in a CONSTRUCT. (Note: this third state also represents NULL in an INPUT that does not have NOT NULL defined)

The reasoning for this can be found in the original Informix-4gl TUI interface.  The TUI interface allowed the user to type in QBE criteria such as

With the introduction of GUI widgets, it is desirable that in a CONSTRUCT that the user can enter as much of the QBE criteria they could enter in a TUI widget, after all the movement form TUI to GUI is supposed to be a step forward.  So where the widget behaviour allows, we have tried to find ways that a user can enter QBE criteria that they could in a TUI environment.

In a COMBOBOX, this means in a CONSTRUCT adding the checkboxes in each row allowing individual row(s) to be selected.

In a RADIOGROUP, this means in a CONSTRUCT allowing the user to select multiple radiogroup buttons.

In a CHECKBOX, this means toggling to the third state to indicate both values.

If it is desirable that you restrict the values entered in a CONSTRUCT to one value then you have two options available to you.

The first is to enter some logic into the AFTER FIELD or AFTER CONSTRUCT.  There is at least 4 different ways you can get what has been entered into a field in a CONSTRUCT. These include…

In your AFTER FIELD and/or AFTER CONSTRUCT add logic that uses one of these functions/methods to get what the user has entered into the field or the QBE criteria that it generates and validate it against the criteria you want to allow.  This could include making sure that something is at least entered into the field or perhaps using ui.Dialog.getQueryFromField to ensure that one row has been selected.

The second option is to use Multiple Dialog and use an INPUT for any field that you only want one value to be selected.  I recall one case had a report program that had something like this …

where printer and number_of_copies were COMBOBOX widgets and the value was extracted and trimmed from the variable where_part before it was passed to the database.  The native COMBOBOX only allowed one value to be selected for printer and number_of_copies and so this worked with 3.X and GDC.  With universal rendering, the user could now select multiple printers and multiple number of copies.  The better code to use in this instance involves multiple dialog similar to  …

With this code technique, you are using INPUT to enter singular data values, and using a CONSTRUCT to enter QBE criteria.

For those that provide negative feedback about the ability to select multiple rows in a COMBOBOX in a CONSTRUCT, there are options available to you.  Deep down, if you are trying to restrict the QBE criteria entered in a field to a single value, then really you should be in an INPUT at this point.