Consumers are driving this trend – unwittingly changing the face of IT through their massive adoption of social networks and Smartphones. The mad rush to mobile commerce is a pure survival instinct for businesses of all sizes, but it’s not just about commerce. Employees are using their personal tablets and Smartphones at work to perform professional functions and organisations around the world are benefitting from the phenomena. It’s called Bring Your Own Device (BYOD) and it’s accelerating. That’s why CIOs are scrambling to catch up, placing the development of mobile applications in their Top 3 priorities. Gartner claims that 80% of all application development will be mobile by 2015 and 40% of those applications will be managed by a Cloud back-end.

This is consumer IT – IT driven by consumers rather than business.

It is the largest disruption the IT industry has enjoyed in a very long time. It has been some 18 years since the Internet first challenged Microsoft’s hegemony of the desktop. Microsoft succeeded in fending off that first threat from Netscape in the late nineties by throwing a spanner in the works with its free Internet Explorer. But Apple, Google and Samsung are a very different ‘kettle of fish’ and their dramatic push to ‘mobile’ has caught Microsoft and Intel off guard. 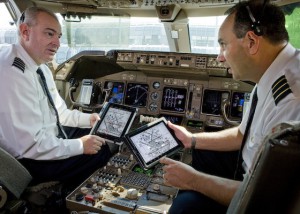 Apple sparked the revolution with iPhone and boosted it with iPad. They weren’t thinking of IT though when they developed those products. They were thinking: “Peace, Love and Understanding”. Cool. What actually happened was that these devices worked their way into the enterprise; first through the backdoor via BYOD and then through the front door with major procurement wins. When commercial airline pilots started using iPads for inflight documentation, the US DoD woke up and procured 16,000 iPads expected to save fifty million dollars in fuel and printing costs over the next ten years. That’s a decent ROI.

The camera in a Smartphone was originally designed to take photos of kittens gnawing holes in Grandma’s cardigan or of Lily doing her first bungee jump off the Hoover dam. But that camera is also being used to perform surgery, record accident damage, healing wounds by patients, burst pipes and stock levels.

The ensuing technology ‘arms race’ is now being fueled by Samsung’s and Google’s insatiable appetite to beat Apple. There is much at stake. In Q1 of this year, Apple took over 50% of all worldwide Smartphone profits and Samsung 95% of all Android profits. This ‘deadly embrace’ between iOS and Android is pushing the technology envelope to exciting heights, benefitting consumers as it steamrolls a path through traditional IT in the process. The hegemony has shifted; Microsoft is on the backfoot; Apple and Google are the new masters, no longer driven by business, but fulfilling the desires of consumers.

On the back of this sea-change, Gartner predicts unsurprisingly the slow decline of the PC. IDCagrees. Aberdeen Group adds that mobile devices are ‘the essential driver‘ for transforming enterprise organizational efficiencies. 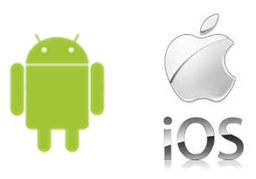 All of which brings us to Genero. Keeping pace with technology is our business. We believe that you, the developer, should focus on your business and not worry about the underlying technology. Never has this been more true than today with the advent of mobile business applications. Developing a dedicated mobile version of Genero is for us just another step in many more to come.

The development of Genero Mobile is well underway and working prototypes are being field tested. Genero Mobile 1.0 is due for iOS and Android Smartphones and tablets in June 2014. Apps will run on both platforms largely unchanged. We will open an Early Access Program (EAP) January 17, 2014.

The good news is you no longer need to choose! With Genero Mobile, you develop for both platforms at once. That covers over 90% of the market opportunity with one source code giving the native ‘look and feel’ you’d expect of each platform. 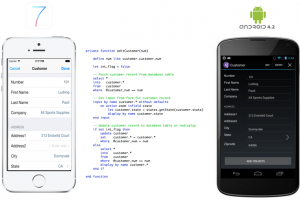 With a ‘swipe-left’ of your finger, you delete records – a function easily programmed using the ‘on delete’ command. The power of Genero’s abstract business language combined with the innovation in today’s mobile devices make for a powerful cocktail. Developing mobile apps has never been easier – no complicated APIs to learn, just an intuitive, easy-to-maintain language that runs indifferently across both platforms. 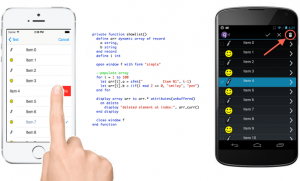 With a click of the camera, insert photos into your data set. Tightly integrate native device applications such as Calendar, Email, Contacts, Telephone, Camera and geo-positioning within the flow of your own code. Benefit from Web components that provide hundreds of apps including device specific readers covering bar codes, QR codes and signature capture – all important for proof of delivery, retail and logistics applications.

Other key features of Genero Mobile are the ability to operate in ‘flight mode’, that is without network access, storing data locally in the embedded SQLite relational database. That database can then be sync’d with a server-side database once network access is established. Genero Mobile may also behave as a User Agent to a remote application, much in the same way as the Desktop and Web Clients do.

See Genero Mobile in action by downloading the sample ‘Stores demo’ to your iOS or Android mobile phone or tablet here.