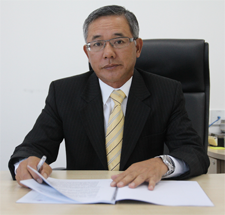 Genero is helping us scale our business by maximizing our market opportunity while keeping development costs in check.

To win the award, companies needed to demonstrate their indigenous Bumiputera origins, own the intellectual property and deliver quality, innovation, strong revenue and market share.

Prior to receiving this award, Century Software was also granted the SME Star Award December 15, 2010. That award was organised by the Malaysian Institute of Accountants (MIA) and the UK’s Chartered Institute of Management Accountants (CIMA) focused on management accounting and good practices with effective cost management.

Established in 1997, Century Software listed on the Bursa Malaysia Jan 31, 2011 and is the developer of industry-recognized Century Financials, a comprehensive FMSS with 43 accounting modules for businesses to process and manage the full spectrum of its financial transaction requirements.

Century Financials Government (CFg) is GST-ready and supports mobile devices. The system – now supporting the latest state-of-the-art Web 2.0 technology – was officially launched by the YAB Minister of Finance II in June 2010. Currently, 10 out of a total of 84 sites have been installed with this latest release. There are more sites in the process of installation. In December 2010, CFg V8.0 obtained IBM certification for government frameworks.

Century Financials is compliant with Standard Accounting System for Government Agencies (“SAGA”) – an initiative by the Malaysian Government to standardize accounting and financial management enterprise solutions used in all its Federal Statutory Bodies.

Century Software has a growing clientele in Malaysia, comprising more than 80 companies and agencies at the Federal, State and Local Government levels as well as the commercial sector.

The Group also has a complementary business of payment aggregation, under
T-Melmax Sdn Bhd, to provide electronic payment and collection solutions to corporations for their Business-to-Business (B2B) and Business-to-Government (B2G) transactions.