Dr. Humphrey is one of the 10 most distinguished software scientists worldwide and developed theCapability Maturity Model (CMM) as well as the Personal Software Process (PSP) and Team Software Process (TSP) technologies. The Mexican Institute of Social Security Services for Civil Servants (ISSSTE) uses CMM throughout its Four Js development. 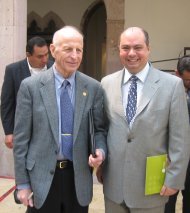 The Zacatecas governor, Amalia Garcia Medina, who attended the event, expressed her commitment in supporting the companies and institutes in order to obtain worldwide excellence in the development of high quality software. 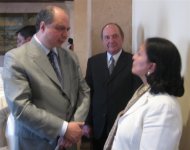 During the event, Four J´s expressed its commitment to supporting the universities and also gave incentives to students and professors to encourage and facilitate their entry into the active world of the business applications development market. Additionally, Four J´s offered to promote both at a national and international level, companies created by graduate students.

Dr.Watts Humphrey is the world’s leading authority on software quality and process improvement. He is employed by the Software Engineering Institute (SEI), at Carnegie Mellon University. Formerly, as Director of the Software Process Program at the SEI, methods, he pioneered the Software Capability Maturity Model (CMM), which was originally funded by the US military and is the most widely used process certification method today.

He continues to work closely with Industry and Government, helping them to implement these improved methods.

He is the author of :

In 1993, the American Institute of Aeronautics and Astronauts presented Mr. Humphrey with the Aerospace Software Engineering Award.

In 2000, the Watts Humphrey Software Quality Institute was named in his honor in Chennai, India, and the Boeing Company presented him with an award for leadership and innovation in software process improvement. He is is one of the ten most influential men and women of software, according to the managing editor of CrossTalk Magazine.