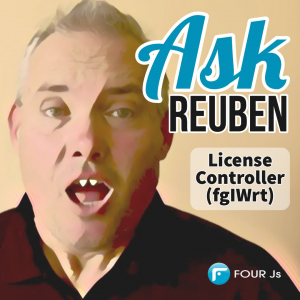 What is the License Controller?

Why do I need to update the License Controller?

What is Patching the License Controller?

If the license has been licensed locally, fglWrt examines the installed license and allows the compilation and runner script to execute.   You may also be aware that fglWrt is the command executed with various arguments at the command line to install and manage the license locally.

If the FourJs License Manager is in use then fglWrt communicates with the license manager daemon process (flmprg) to determine if the compilation and runner script are allowed to execute.  In this instance the communication is …

The protocol used for communication between fglcomp/fglrun and fglWrt is very static and stable.

The protocol and information that is passed between fglWrt and flmprg is more subject to change as extra functionality is added to the licensing mechanism.

For this reason, you will observe that if you run "fglWrt -V" you should get a version number returned that is not the same as the result of fglcomp -V / fglrun -V but instead is the same or similar to the result of "flmprg -V".    For instance with FGL 3.20.13, if you run fglWrt -V you might get a result  5.20.17.  (the fact that 20 is the same is a coincidence).

To determine if you need to "Patch The License Controller",  compare the output of fglWrt -V and flmprg -V, ideally the two version numbers in the format X.Y.Z are the same.  If the Z number if different e.g. 5.20.16 vs 5.20.17 then you should be ok (this is similar to a situation where the GDC and FGL version numbers vary only by the Z number).  If the X or Y numbers are different e.g. 5.19.16 vs 5.20.17 then you definitely should "Patch the License Controller".

The process of patching the License Controller effectively replaces the copy of fglWrt shipped with a fgl package with a newer version.  If you look in the downloads area of the website, where you download the license manager, you will also see an an entry for the License Controller, as the following screenshot shows ...

... this is a zip file and all that is required as per the instructions here is to uncompress this file in the FGLDIR directory (or GREDIR in the case of the Genero Report Writer).  To understand what it is replacing, uncompress the zip file in another directory and note what it contains.  The important thing is that in the bin directory there will be a newer fglWrt.