Four Js turned our in force to join in the celebrations and spread the word at the same time about the value of Genero to a largely non-Informix audience.

Interest was high and many Genero evaluation packages were distrbuted to developers eager to give Genero a test drive.

“Our industry is undergoing massive changes that provide great opportunities for those corporate enterprises and technology vendors that are willing to embrace them,” said Marten Mickos, CEO of MySQL AB. “As MySQL celebrates a decade of open source success, our user conference will become a focal point for developers and key industry players interested in helping to shape the direction of things to come.”

“The MySQL Networks program marks their strategy to pursue enterprise core business applications. As a result, our customers increasingly enquire about integrating our two products. Our presence at this User Conference demonstrates Four Js desire to satisfy that curiosity aswell as reaching out to a new audience in need of scalable, business critical development environments.” declared Bryn Jenkins, COO Four Js Development Tools. 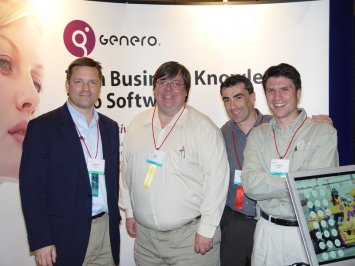