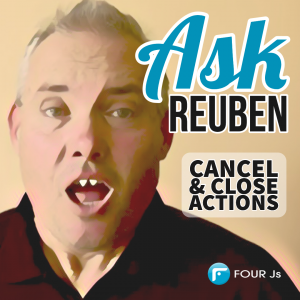 Why is there an int_flag in dialog code?

What does DEFER INTERRUPT do?

What is special about the cancel action?

What happens when user clicks close on a GDC window?

The cancel and close actions have some interesting characteristics in a Genero application context.  To give a better understanding it is necessary to go back to the character based origins of Genero.

If we look at a TUI Informix-4gl application, an INPUT statement would typically be coded

but it is unlikely you would find an

What does this all this mean?

A dialog had two exit keys.  If you were happy with the dialog, you would press the key specified by OPTIONS ACCEPT KEY.  If none was specified, then it would default to the Escape key.  We might think this choice of key strange but in the keyboards of the day it was bigger and physically separate from other keys.  (Someone with more grey here than me might offer a better explanation).

The Return/Enter key was also used to move to the next field which may have been also tied to the fact this key was also placed in the numeric keyboard and facilitated its use in high-volume keyboard input.    This moving to the next field could also result in the end of the dialog depending on the value of OPTIONS INPUT WRAP.  With OPTIONS INPUT NO WRAP the dialog would exit if the user pressed Return in the last field.

When the dialog was exited for either of the above two reasons, the AFTER INPUT block would be triggered.

If you were not happy with what was entered in the dialog, you could cancel it by pressing the interrupt key for the terminal.   This choice of key was configured outside the application by the TTY settings.  This was typically Control-C.  The DEFER INTERRUPT command told the runtime that if the running process received this key whilst the user was in the middle of a dialog, it meant that the user intended to exit the dialog, don’t interrupt the process, and so the runtime would enter the AFTER INPUT block with the interrupt flag (int_flag) set.

This allowed the code to stay the same as

If you were starting from scratch you might choose to go down that path.  With Multiple Dialogs, as that is new code, that is the path you may need to consider.

With GUI windows, there was something new that needed to be considered.  The top-corner of a Window typically contained an X (on OSX a red circle in top left).  What should happen when the user clicked this or pressed the corresponding accelerator key (Alt-F4)?  There are a number of circumstances detailed here but with existing code that would not have an ON ACTION close, the runtime would proceed as if cancel was triggered.  That is the AFTER INPUT would be entered with the int_flag set.  If you wanted to distinguish between cancel and close then you needed to explicitly add an ON ACTION close to handle it.

MENU statements provided an interesting dilemma.  If you had …

… and the user clicked the close icon (or pressed escape) what was the value of the variable choice?   The behaviour is documented here.  You do need to pay attention as their maybe circumstances where the above code can exit the MENU without the choice variable being populated!  That is normally identified and captured as part of a Genero transformation and incorporated in your library code and/or coding standards.

The default Action Defaults file has values that help illustrate the accept, cancel, and close actions.  Bot the cancel and close actions have validate=”no” meaning that the current field value is not validated when these actions are triggered.

The default acceleratorName values of Return for accept, Escape for cancel, and Alt-F4 for close  default to the keys you’d expect in a GUI application.  You could change values for accept, cancel in your .4ad to Escape, Control-C but I would not recommend it.  My experience is that when users moved to the GUI environment they adapt to the normal GUI keys very quickly.

The ACCEPT INPUT command can be used so that other actions trigger the validation, AFTER FIELD, AFTER INPUT blocks that the accept action normally does.

Hopefully that has given you some history to why the AFTER INPUT code typically looks like it does, and what happens when the accept, cancel, or close actions are triggered.