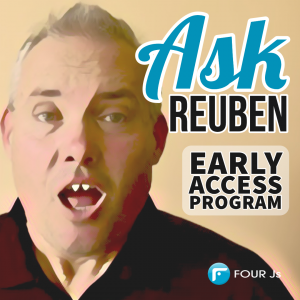 What is an EAP?

Why should I participate in an EAP?

What happens if I don’t participate in an EAP?

What is expected of me in an EAP?

How do I register for EAP?

What is an EAP?

EAP is short for Early Access Program, and is where we give you the opportunity to try out and provide feedback on our next release before it is officially released and is GA (Generally Available)

What Is In The EAP

The announcement notice ( 4.00 announcement notice) has some initial details.  More can be found once you register and read the New Features and Upgrade Guide sections of the documentation, and more maybe added over the course of the EAP.

Why should I participate in an EAP?

The EAP is your opportunity to influence our future releases …

What is expected of me in an EAP?

Minimal expectation is that you …

What we would like, and what puts you in consideration for an OLGA award at our developer conference is if you …

Ideally if we do the GA release on 30th September, then you should be in a position to do a release of your product on 1st October using this new release and incorporating new functionality we have introduced.

How do I register for EAP?

It is a simple registration process at  https://4js.com/download/eap/?

What happens if I don’t participate in an EAP?

The biggest danger is that we change something that breaks your code or changes your application on some way. We try not to do this, but it can happen.  During the EAP we have more options available to us to resolve any issue.  If you don’t participate in the EAP and only discover an issue after the release has occurred, then you may be in a position where you have to wait until a maintenance release for the issue to be resolved, or we may decide that this is the future path and you have to amend your code.

Also if we add any new feature, when you go to use it at a later date, you may find that you are restricted in its use because it is missing a feature that is important to you.

It is much more difficult for us to make change after a release has occurred.  With any subsequent maintenance release we …

The best time for us to make changes is in the EAP period BEFORE a product is released to GA..

I intend to skip a release, should I participate in the EAP?

The decision to participate is always upto you and you need to weigh up the positives and negatives of participating, and just what your level of commitment is.

I will give you this example, in recent months I have seen customers upgrading from 2.50 to 3.20 i.e skipping 3.00, 3.10.  They have encountered issues where upon analysis we discover that some behaviour was changed between 2.50 and 3.00, and they are the first to report a negative impact of this change.   If they had participated in the 3.00 EAP 6 years ago  we could have take their feedback into account and made adjustments accordingly, but now 6 years later we have to consider that users of 3.00, 3.10, 3.20 are accepting of the change in behaviour.

Is there any particular reason I should look at this EAP (4.00)?

This is the first release with the user interface standardised on Universal Rendering.  Native Rendering is no longer shipped inside the front-end clients.  If you have not taken the opportunity to review Universal Rendering in any of the 3.xx releases then this is your last chance.

Why is there not a package for my O/S  in the EAP?

We focus on delivering Linux, Windows, OSX packages as we expect most senior developers to be using Genero Studio on these platforms.  Packages maybe available for other ports upon request.  When preparing releases more frequently as we do during the EAP, it is less time consuming to only produce 3 packages instead of  10+.

What documentation is there during an EAP?

A link will be provided as part of the registration and/or initial downloads.

These can be found in the normal places, that is FGLDIR/demo, and Tutorials and Samples in the Genero Studio Welcome Page.  Some may also be made available via our GitHub repositories over the course of the EAP.

What is Feature of the Day?

During the EAP process, I twill do some posts about the various new features, these are labelled Feature of the Day (FOTD).   These posts aim to both advertise and show possible uses in order to motivate participants to look at a new feature of change,  and also to start discussions about the various features and changes.  These posts don’t aim to tutor you in the use of a new feature, the documentation needs to stand on its own two feet in that regard.

How do I provide feedback?

As part of the EAP there  is a forum / mailing list, further details about this will be provided during the EAP process.

Please get in the habit of reading about the other issues as they are raised, and of periodically reviewing the historical discussions.

Provide similar information as you would with  a support case.  That is …

I would encourage you to get involved in other discussions.    Even a simple +1 just to let us know that you agree with another developer, and so that they don’t feel they are in a minority of one.

There are many nationalities participating and many for whom English is not the first language.  if in doubt, provide a minimal reproducible example, log, screenshot, or recording to illustrate the issue and/or difference with an earlier version.  One of my favourite sayings is

Nothing spins a geeks propeller like an isolated reproducible example.

… this means if you show a developer a small example that consistently shows an issue, that will get their attention.  As they go to sleep at night they will be thinking why does this line of code do this in version A and do something else in version B.