“We invested heavily in this show,” proclaimed Philippe Wagner, VP Marketing North America. “This is our first time here and we wanted to get a feel for the market. Our intuition turned out to be right. Genero is pretty unique in this marketplace and there’s a lot of potential.”

“The sold-out exhibit hall was crowded with attendees, media coverage of the event was tremendous and the conference program was very well attended. And our exhibitors were thrilled by the quality of the audience this year in San Francisco,” declared Melinda Kendall, group vice president at IDG World Expo.

The event featured an exhibit hall packed with nearly 200 of the most innovative companies serving the Linux and Open Source community – up 25 exhibitors from the previous year. The .Org pavilion hosted the non-profit organizations in the Linux community, and the Linux Rookery hosted Linux start-up companies and first time exhibitors.

Highlights of the conference included keynote presentations from executives at Oracle, HP, Red Hat, Mozilla Foundation, IBM, Open Source Development Labs, Google, Novell and the Software Freedom Law Center. Over 100 conference sessions, labs and tutorials that educated, trained and illustrated how companies across the globe have achieved higher profits and increased their productivity by utilizing Linux.

The next LinuxWorld Conference & Expo is scheduled to take place April 3-6, 2006 at the Boston Convention & Exhibition Center.

Four Js presence was marked by this handsome 20’x20′ booth. 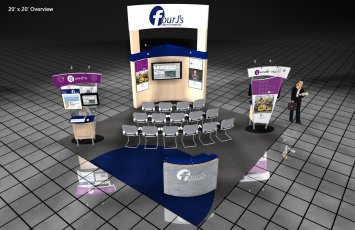 Click here to learn more about this and upcoming events