You are here: Home1 / News2 / Headline news3 / It Was Twenty Years Ago Today!

It Was Twenty Years Ago Today!

Irving, Texas – March 12, 2012 – Some computer legends were born in garages, others on the back of cigarette packets. This one was born around a kitchen table. 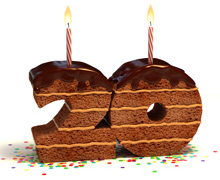 Two frustrated developers, keen to see their application generator reach a wider audience, crossed paths with an enthusiastic entrepreneur, keen to sell it to the rest of the world. Those developers were Jean-Claude Diedrich and Jean-Philippe Kalms. The entrepreneur? A certain Jean-Georges Schwartz, ex-fighter pilot, sailor, engineer, contrarian and astute business man rolled into one. Several months later, they engaged their first employee, Johann, transforming the trio into a quartet of John’s – or “Four Js” as they were soon to become known. And the rest, as they say, is history.

On March 12, 1992 Four Js Development Tools was formally incorporated and set sail to navigate the waters of the world’s IT departments preaching “The gospel according to Jean-Georges“. The message? That procedural languages were excellent for developing business process oriented applications. That doing so would increase value by saving development time. That doing anything else is wasteful.

Their first product was an Informix 4GL application generator, but Jean-Georges was already setting course for a new horizon; helping developers prolong the life of their applications. Mindful of his own experience as an ISV, forced to redevelop his campsite management solution no less than three times in just 8 years – from Commodore Basic, to Ryan McFarland Cobol, to Informix 4GL – the course he was setting would make business logic sacrosanct, eliminate unecessary rewrites and give ISVs the time to differentiate their solutions, make money and have fun all at the same time.

“When I first met Jean-Georges Schwartz, I had 50 people, $6M in revenues and my core banking solution Delta-Bank was character based,” said Claude Delage, CEO and founder, Delta Informatique. “Today, I have 250 people, $46M in revenues, close to $5M in net profits and I was recently acquired by SOPRA, a billion dollar leader in consulting and services. My customers are some of the largest financial institutes in the world. DELTA-BANK was quickly transformed into a state-of-the-art solution with resources and budget that would have been an order of magnitude greater with a rewrite.”

“We have struggled to keep up with native Microsoft tools because of their relatively short product lifecycles,” said George F. Pepper, Senior Vice President Operations, Sungard K12 Eductaion. “Four Js has insulated us from that and allowed us to focus on our customers and product functionality, while keeping our applications current, vibrant, and technologically competitive.”

“Genero continues to deliver beyond our exectations with a proven and predictable rapid application development environment that allows us to deliver mission critical systems for Police, Fire and Emergency services – lives depend upon it,” said Warren Loomis – President and CEO Versaterm. “What makes FourJs exceptional is the partnership and their ability to adapt and deliver – a rarity in today’s business climate – permitting us to better respond to our customers. We value the partnership and wish FourJs all the best in the next 20 years.”

Four Js spent the next 3 years revolutionizing Informix 4GL for the emerging world of graphics, based on its own virtual machine and compiler designed for the most popular computer servers and workstations of the day.

In 1995, it launched ‘Universal Compiler’ – the first iteration of what later became Genero – an intelligent, abstract development infrastructure for business applications. And at a time when ‘the talk’ was about ‘object orientation’, Universal Compiler flew in the face of industry pundits by quickly finding grateful homes.

Universal Compiler grew into Business Development Suite before finally settling in as Genero, where it enjoys today an active customer base of thousands of developers and millions of users.

Four Js continued success through the world’s first ‘dot bomb’, several world financial crises andnumerous natural disasters is testimony to its resilience and the loyalty of its customers.

On behalf of all Four Js employees, we sincerely thank all of our customers for their loyalty and business.

Here’s to the next twenty years!

Meet Genero team at the 2012 IIUG Conference
Scroll to top